The same thing happened with Twilight, I didn’t start reading the series until the last book, Breaking Dawn came out. I saw the huge display inside a Borders store the day it came out, got curious and bought the first book. 5 days later I had the entire series read. I tend to get into things at the tail end of them 🙂

Since Twilight, I’ve been reading more YA novels at the recommendations of friends. First was Suzanne Collins’ The Hunger Games series, which I absolutely LOVED. Once I finished Catching Fire, I was disappointed to learn that the last book wouldn’t be published until August 24th of this year.

Next up was the Percy Jackson & the Olympians series, starting with The Lightening Thief, since the movie was due in theatres pretty soon. I was actually reading the books over my Anniversary vacation. I thought they were alright, but very Harry Potter-esque. I didn’t like them as much as I liked The Hunger Games & Catching Fire. And The Lightening Thief movie? Incredibly disappointing! Not faithful to the book at all (what is all this business about Persephone’s pearls?), tons of elements of the movie were completely made up when they didn’t need to be, the book was fine as it was.

Now I’m on to the His Dark Materials series, about 100 pages into The Golden Compass (or Northern Lights as it sometimes called). I never saw the movie, and apparently it wasn’t faithful to the book at all so I’m not planning on it. So far I’m really liking the book. It has a parallel universe to our own, much like The Hunger Games, and I’ve found that I enjoy those novels more.

Feel free to comment if you also enjoy YA novels and have some to recommend to me! 🙂

there is a new trailer out for twilight, bbs!! I saw it much earlier today, about 4 hours before the original release time, lulz, thanks to my twatters!

Ok, I’ve been looking forward to the VMAs all week because I knew Robert Pattinson (Edward Cullen), Kristen Stewart (Bella Swan), and Taylor Lautner (Jacob Black) would be there and would actually be presenting an award. Ecstatic! I missed the pre-show, but luckily Teresa DVR’d it so I was able to fast forward through it and make sure that I didn’t miss any Twilight cast interviews. FINALLY the show comes on. And I sit through Russell Brand’s awkward intro, Jamie Foxx’s weirdness, etc, and FINALLY OMG THE CAST OF TWILIGHT UP NEXT. I barely managed to suppress the fan girl in me, I was so giddy with excitement.

And finally! There they are! Walking on stage! Kristen looks so cute! And OH! Cam Gigandet (James) is there too! Lovely! They start talking… they each say their piece and now it’s Rob’s turn.. he says exactly ONE word, POSSIBLY TWO, when RUSSELL FREAKING BRAND INTERRUPTS HIM WITH SOME BULL CRAP ABOUT MYSTERY, AND THEN THEY CUT TO A PERFORMANCE OF PARAMORE. And Rob. Gets. To. Say. Nothing.

Why, Russell Brand, WHY?! You have Two! Hours! As the host of the show to talk! Talk to your heart’s content! Why interrupt Robert Pattinson in his ten seconds on stage?! Why?! JUST SHUT UP AND BE QUIET. Oh. I cannot convey my irritation at that moment.

I will now go troll the intarwebs for some red carpet interviews. Hopefully Russell Brand didn’t figure out a way to interrupt him there.

*edit* haha I wasn’t the only one who noticed!!

I took the Twilight Quiz at MTV.com. It’s actually really easy, lol. I knew all of the answers. Yay for Twilight Tuesday!

So Stephenie Meyer (author of the Twilight saga) finally posted a reaction to the Midnight Sun leak on her personal website. Needless to say, it’s obvious she’s very hurt by the leak. I can’t imagine what it must be like not only to know that someone close to you betrayed you, intentionally or not, but also to have your hard work splashed all over the internet for everyone to see before you were done with it, before it was perfect, and having to hear everyone’s criticisms of a rough draft. It must be incredibly hard. But I wish she would have a different reaction. So many people have read it (myself included) because we’re so in love with her work that we’re dying to get more. I wish she would see the flattery there, that people love her work so much that we would sit through reading a badly scanned, and in lots of cases out of order, rough draft of a project just so we can get more. And I very much doubt that it would have hurt sales of the book at all, although I’m pretty sure Meyer doesn’t really care about that part of it. At any rate, Meyer has decided to put the project on hold indefinitely because she’s so hurt about the leak, and has posted the project online for everyone to see. And for anyone thinking that they’ve read the leak already, so why bother? This draft that Meyer has posted is longer, by almost 100 pages. So there’s that. (Edit: I just got done reading it, it’s still just the first 12 chapters, but the paragraph spacing is different, so the “official” one is longer.) But I am really disappointed with her decision. I know that indefinitely doesn’t mean never, but any more delay on this is really hard for me, haha. Other than Twilight itself, I haven’t liked any of the other books as much as I like this draft of Midnight Sun. I hope that she can return to this project soon and share it with the rest of us. I am really looking forward to it.

And now, back to (re)reading the Midnight Sun draft! 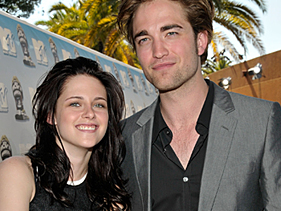 When I realized today was Tuesday I got way too excited, lol. Here are some new Twilight tidbits from the MTV Movies Blog:

Ah, now to wait until next Tuesday… 🙂

There’s a video of the panel at ComicCon on the interwebs at AsianSchoolBoy.com. (Thanks BellaAndEdward.com! Beware… there’s lots of screaming, lol.

I found this Borders Twilight Page which has the teaser from the Penelope DVD that I hadn’t seen before. I think it’s my favorite leaked footage from the movie so far!!

Every Tuesday, the MTV Movies Blog posts an article or two about the upcoming Twilight movie — or anything Twilight related, actually. I follow the blog in my Google (feed) Reader so I don’t miss any Twilight posts. You can follow this link to read all of their Twilight related posts. There are some really good interviews on there with the cast and with the author, Stephenie Meyer.