Been a long time since I’ve updated and I’m sure no one reads this but me, but even so it’s good for me to write it all down. When we last left Mike’s cancer story, he was recovering from surgery and radiation therapy administered after doctors found another tumor on his back. This was his second cancer diagnosis. Doctors determined the cancer was a radiation-induced sarcoma; basically, his cancer was caused by the radiation treatment he had received for his synovial sarcoma diagnosis back in 2001-2002. It’s extremely rare, although becoming more common as cancer survivors live longer lives after surviving cancer. Here is a great article about it.

In September 2014 we went to City of Hope for a checkup with Michael’s doctors. At that time they did MRI scans and saw something in his spleen but decided to monitor it for the time being. Otherwise they were very happy with his progress. Michael and I were doing very well. In July 2014 we sold our catering company and Mike continued on as the executive chef. The new parent company took over all administrative duties, thereby dissolving my position and my involvement in the company (which I am very happy for).

On December 2, 2014 we returned to City of Hope for his 3 month checkup. Scans revealed the “something” in his spleen had grown significantly in size. Biopsy was ordered for December 15, 2014 and we received results in early Jan 2015: it was cancerous. Unfortunately, the biopsy results were inconclusive as to the type of cancer it was. It could be a re occurrence of the synovial sarcoma he had in 2001, unlikely as it is extremely rare for a re occurrence of that cancer to appear in an organ. It could be a metastatic cancer spread from his diagnosis in 2013. Or it could be a third, completely new type of cancer.

As the spleen is not an organ vital to living, the decision was made for Mike to undergo laparoscopic surgery to have his spleen removed and then from there to decide whether further treatment would be required. Unfortunately, during his pre-surgery scans four additional lesions were discovered in his liver. Surgery was postponed and Michael began chemotherapy treatment to hopefully eliminate the lesions in his liver (as well as any other tumors not detected by scans) and reduce the size of the tumor in his spleen. Without treatment, Mike was given 3-4 months to live and treatment was given a 30-40% success rate.

Michael began chemotherapy on January 26, 2015. It is a once a week outpatient treatment with a 3 week cycle. On day 1, he receives gemcitabine. On day 8, he returns to hospital and receives a dose of gemcitabine followed by a dose of taxotere. On day 9 he receives a Neulasta shot to help support his immune system and help his body produce white blood cells. On day 14 he has a checkup with doctors (no chemo) and then the process starts again the next week.

The first treatment Mike received caused him to have an allergic reaction and he broke out in hives. We administered steroids, which caused steroid acne, and he recovered. After his second treatment he almost lost the entire use of his legs. He could not walk without assistance for 3-4 days. He also began experiencing tingling in his hands. By the third treatment he was losing a lot of hair, we ended up shaving his whole head (beard and hair).

When we arrived at the hospital for his fourth treatment on February 23, doctors noticed his back was very swollen and some open sores had yellow pus. Turns out Mike had developed an infection around the hardware on his back from his surgery in 2013. He was immediately admitted into the hospital and chemotherapy was put on hold. That Thursday Mike underwent surgery on his back (yet again) so doctors could correct the infection and chemotherapy could continue. It was determined that after receiving radiation treatment in the Spring of 2014, the muscle and skin the plastic surgeons had placed over the hardware had deteriorated so much that the bolts in Mike’s spine were puncturing the skin. 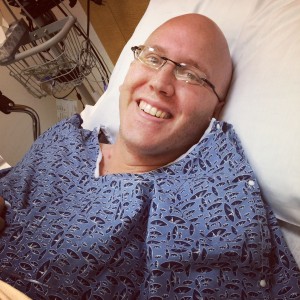 Michael was very excited about this surgery, he had been complaining to his doctors for months that the bolts on his back were very uncomfortable and he was looking forward to the problem being corrected and being more comfortable in the future. Doctors cleaned out the infection, drilled his bolts a further 12-15mm into his spine to prevent further protrusion, and a new muscle flap was placed over the hardware. Doctors expected to need to do another skin flap or skin graft over the site as irradiated skin does not typically heal up again, but Mike’s skin reacted well enough that neither of these procedures were necessary. Surgery was just 8 hours long and Mike was in the hospital for 10 days, longer than anticipated but he had problems with pain management and fevers.

Once Mike returned home we had to continue administering antibiotics intravenously every 8 hours for 30 days (these were cefepime and cubicin). Luckily, since Mike had a portacath installed for chemotherapy, nurses could install an access needle with a short line. All we had to do was push the antibiotics in with a syringe.

Recovery was not all smooth sailing, unfortunately. When we went home his back was leaking a lot of fluid from a portion of his incision that had come open. Doctors installed a catheter with a bulb drain and stitched up the incision. Eventually Mike was draining over 400ML a day and doctors determined it was likely spinal fluid leaking, which caused Michael terrible headaches and nausea. Since so much work had just been done around his spine, it was likely a small tear formed in his spinal membrane which was leaking spinal fluid. The drain was (blessedly) removed and Michael began to feel much better. Our bodies produce more spinal fluid everyday so once it stopped draining, Mike’s body could catch up. Doctors were concerned a seroma would form, which could run the risk of becoming infected again but there is not much that can be done to prevent it.

Finally, on March 26th Michael was given the OK to start chemotherapy again! He has completed one cycle so far. We expect to continue for at least 3-4 months or until scans show no lesions in Mike’s liver. The tumor on his spleen was quite large so I am expecting he will undergo a splenectomy once doctors finish chemotherapy treatment. Mike is ready to get this chapter behind him as we have something big to get ready for… (to be continued)