Again, shelf looks much the same as last week:

Still got Break, Blow, Burn, The Road Less Traveled and Lolita on the shelf. However! I did make some progress.

A couple of weeks ago I talked about how I left off on Beauiful Chaos because I couldn’t remember the story line. Well, I re-read the first book in the series, Beautiful Creatures (now coming to a theatre near you!), read a summary on the second book and got back on track with the third novel, Beautiful Chaos and finished that Sunday night. 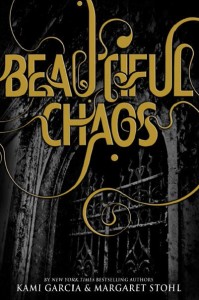 Beautiful Creatures is a Southern gothic Young Adult novel, the first in The Caster Chronicles series. The book starts out with a young man named Ethan who falls in love with a girl named Lena… who is not all she appears to be. Turns out she is what is called a Caster, or a person with magical powers. On her sixteenth birthday she, like all of the members of her family before her, will become either a Light (good) Caster or a Dark (evil) Caster. Other Casters can choose which side they will become but in Lena’s family, fate chooses for them. However, when it comes to her birthday she is able to choose for herself, throwing the world out of balance and resulting in the deaths of people close to her. The next two books, Beautiful Darkness and Beautiful Chaos explore the consequences of her choice. There is a fourth book in the series which (I think) wraps up the story.

Lots of people compare the books to the Twilight series but I actually think they are better. If you enjoy reading YA books I definitely recommend them!

I’m linking up today with other readers over at Patchwork Times. Check them out!