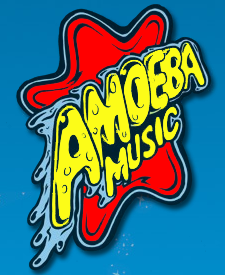 One great thing about living close to a big city is being able to easily visit the awesome stores they have there. Yesterday I drove to Hollywood with my sister, brother, and a few of his friends to hit up Amoeba Music. The place was completely awesome! They have a HUGE selection of new and used CDs and records, from a WIDE variety of genres and artists. And that’s just the first floor! The second floor has a pretty decent selection of new and used DVDs.

I dug in immediately, looking for CDs from my favorite artists that were hard to find at the places I usually buy CDs, like Target and Best Buy. I ended up finding several CDs from artists like The Magnetic Fields, Leonard Cohen, Meiko, Priscilla Ahn, Eric Hutchinson, and many, many more. I don’t know if you noticed, but it’s pretty hard to find a CD in stores if it was released more than 6-12 months ago, or it’s not on the Billboard charts. I know what you’re thinking, why not buy online? I do buy online; that’s why I already had Meiko’s album before I saw it at Amoeba. But sometimes the added taxes and shipping costs increase the cost of the CD above what I’m willing to pay. And Amoeba has a LOT of used CDs, which lowers the cost even more. I ended up walking away with The Magnetic Field’s The Wayard Bus/Distant Plastic Trees, Leonard Cohen’s Various Positions, and a tribute to Leonard Cohen, I’m Your Fan, which includes performances by The Pixies, REM, and Nick Cave, to name a few. I also got a couple of Miyazaki DVD’s I’ve been meaning to pick up, but haven’t because for some reason, they cost quite a bit more than regular DVDs. Anyway, they were Whisper of the Heart, which I rented on NetFlix recently and loved, and The Cat Returns, which I downloaded and watched quite a while ago.

My sister got a few CDs, the Hits of Erasure, ABBA Gold, and the Sex and the City Soundtrack. She joked as we were driving home, listening to her CDs, that she was turning my car into a gay club, haha. 🙂 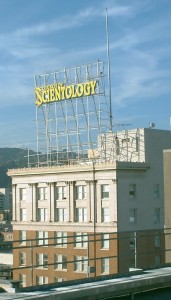 After Amoeba, we waited outside for the rest of the party to be done shopping and I noticed that we could see the Church of Scientology’s location on Hollywood Blvd from a distance. It kinda creeped me out. It creeped me out even further when one of the guys in the party mentioned that the Scientology created CCHR headquarters, or Citizen’s Commission on Human Rights, was down the street just a little ways and they wanted to visit it out of morbid curiosity because inside there is a “museum” on psychiatry. We were all curious, so we decided to check it out. Turns out the museum is called “Psychiatry: An Industry of Death” and the “museum” was every bit as creepy as it sounds. It felt like I was walking into the Museum of Tolerance, a Holocaust museum, also in Los Angeles. It had all these exhibits showing the history of psychiatry, including of course shock treatment and lobotomy. CCHR blames the rise of Nazism and the Holocaust on psychiatry. It also had an exhibit with pictures of different celebrities and little descriptions underneath the pictures blaming psychiatry for their deaths. There was also a section that showed statistics on psychiatrists; supposedly more psychiatrists than physicians commit suicide, get divorces, etc. They also showed a big wall with pictures of psychiatrists behind bars for being convicted of various crimes, ranging from a hit-and-run fatality to rape and sexual assault of patients. And of course, there was a room blaming psychiatry for the Columbine school shootings and various other school shootings. All in all, it was quite disturbing and I wanted to get out of there as soon as possible. Chris and his friends were irritated and angry about the museum, quick to point out the flaws of logic in the exhibits, but Teresa and I just wanted to leave.

Afterward we walked to Roscoe’s Chicken and Waffles off of Gower and Sunset. It was so good! I was suspicious about the pairing of fried Chicken and waffles, but my suspicions were put to rest after that visit, haha.

Anyway, that was my Sunday and even with the scary Scientology excursion, it was really fun. I wish I had my camera. 🙂

One thought on “Hollywood, Amoeba Music, Scientology and Chicken and Waffles!”