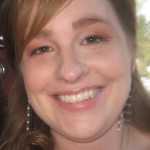 Me at the wedding

Look at at that, as soon as NaBloPoMo ends, I go M.I.A. for over a week!

Well, I was in a wedding last weekend as the matron of honor. I was so nervous about it, but everything went off beautifully and the couple was very happy in the end. Here is the speech I nearly had an aneurysm writing. I also started crying mid way through it!

Good Evening everyone, my name is Erin and I am proud to be the matron of honor. Bride and Groom*, congratulations on your marriage. I know you two will be really happy together.
Groom and I have known each other since high school, and I first met Bride when she started dating him in college. I liked her right away because I saw how happy my friend was when he was with her, and then I could see why he was so happy. Groom, I don’t have to tell you what a sweet, caring, thoughtful person Bride is and I can’t begin to thank you enough for bringing someone like her into my life. Bride is the kind of person whose “effect […] on those around her [is] incalculably diffusive: for the growing good of the world is partly dependent on unhistoric acts; and that things are not so ill with you and me as they might have been, is half owing to the number who lived faithfully a hidden life” like Bride (Middlemarch).
And actually, our meeting was pre-destined. Bride and I lived a block away from each other when we were in elementary school and we went to the same middle school, but never knew each other. In fact, when we were in middle school we both took a quiz sponsored by our student council that was supposed to tell us who our friend matches were. For some reason I kept mine and came across it a couple years ago, and guess who my number one friend match was? Some girl named Bride. So, see? I did learn something in middle school.
At this point it’s usually customary to offer up some quote or a tidbit of advice about love and married life. Unfortunately, having been married for two years now I know that there’s nothing new I can tell you that you haven’t heard already. Being married is hard work. And there will probably be days when you are so annoyed by your spouse, you may wonder what in the hell you were thinking getting yourself into this whole marriage gig to begin with. Ephesians says to “Patiently put up with each other and love each other.” (Eph 4:2) Because then you’ll remember the time he tried to make you soup when you were sick, or how you told jokes in the dark before sleeping and laughed until your sides hurt, and it’s all worth it.
“Rejoice in the wife of your youth […] may you always be captivated by her love.” Prov 5:18-19
As your relationship began among books, it is fitting that it continues in “Marriage, which has been the bourne of so many narratives, [and] is still a great beginning, as it was to Adam and Eve,” (Middlemarch).
Here is to the beginning of the next chapter of your narrative. Cheers, to Bride and Groom.

*Named changed to protect the innocent!

Next week I am flying to Knoxville, TN to attend another wedding. Fortunately, this time I am not in it, just a guest!