I couldn't find any good pictures of Mike and I from Valentine's Days in the past, so here's one of us from 2004.

Happy Valentine’s Day! I hope you’re spending it with your loved ones, either by doing something special or by just spending time together. My husband and I are doing something special and spending it together… kind of! One of our businesses is a catering company, and tonight we are catering dinner for about a dozen couples at a local winery. So hubby will be cooking and I’ll be running around serving!

It’s not ideal, but at least we’ll be together and that’s what’s most important. 🙂 Enjoy the day!

As of today, my husband and I have been married three years. 🙂 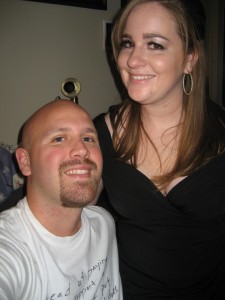 My husband, Mike and me on New Year's Eve. I look kinda weird because I was dressed as Kim Kardashian, but I took off the wig in this picture.

I just went looking for a post on my wedding, and there wasn’t one! I can’t believe I forgot to post about my wedding. :uhh: Well, here’s a picture of us on our wedding day. As much fun as it was to marry my best friend in front of our family and friends, we had been together so long at that point it kind of felt like we were already married, lol. We purposely chose to get married as close to our original dating anniversary as possible (Jan 20th), since we had been together almost SIX YEARS by the time we got married. So even though we’ve only been married three years… we’ve been together for nine years now. I can’t believe it! 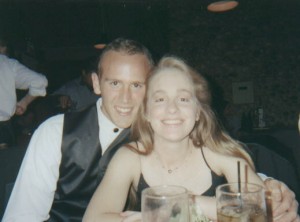 Mike and I on our first date in 2003, our senior year Winter Formal.

I can’t believe how young we look there. x_x Happy anniversary to my best friend, my confidante, my biggest supporter and the love of my life! We are going to dinner tonight to celebrate.

Have a great day!

For our first anniversary of marriage, Mike and I took a trip to Los Angeles, CA & Marana, AZ. Here are some pictures! END_OF_DOCUMENT_TOKEN_TO_BE_REPLACED

I just had a conversation with my husband that, I think, sums up our marriage.

Eventually I brought him his wallet, but didn’t go with him to BevMo. Some wives send their husbands out for milk or diapers, but in our house it’s “Don’t come home without the vodka.”

I had a cold shot of Tequila waiting for him when he got home.

I quit my job Monday morning, thank goodness. I was able to spend the entire day with my Michael without a care on my mind, something I haven’t been able to do for a couple weeks now. It was a nice break. 🙂 In the morning we went to 24 hour fitness and did some weights, then we went back to his place, showered and went to lunch with his parents. We went to Salt Creek Grille for lunch, which ironically is where Alex and Jason went on their date on that night’s episode of Laguna Beach! I’m thinking of making a REAL guide to Laguna Beach based on the series (rather than this lame map they have on MTV.com).

Predictably, Mike’s parents started harping on him about the usual: school, work, how he needs to get a “five-year plan,” etc. Mike is so good, if it were me I would have started shouting at them about giving this tired subject a rest. After all, it’s only about the fifth time in the last month they have brought this up. But he is so patient with them and reminds me that they only want the best for us, please don’t take what they say the wrong way, etc. But I’m really sick of them always asking us if we’ve started planning on any future commitment yet. Mike’s barely 21! I don’t know why they are rushing him into marriage. Just because his brother is getting married next year doesn’t mean we have to be. I’m not anywhere near being close to getting married, I’ve said so before many times, but they will not drop the subject. So I told Mike that he really needs to just move out and be on his own immediately. I’m really tired of always being around them, especially since I worked with them for two years. I would really be fine with seeing them once a month, haha. 😀 Maybe Mike can see them more often if he feels like it. 🙂

After that, we attempted to go to the Sawdust Festival, but it had closed the day before. Bummer. So we parked and walked around downtown Laguna Beach for a while. We stopped by a Koi pond place on the way back home, but they were closed, too. Bummer. 🙁 We almost went out to see March of the Penguins, but then I got sleepy and lazy and just wanted to cuddle with Mike.

Overall a relaxing day. Today I called a tutoring place that had called me last week wanting to set up an interview. I never called them back because I wanted to see how things went with the nanny position. The lady said she wants to have me come in and interview, but she needed to talk to the owner of the place before she could confirm. Hopefully she calls me tomorrow morning. 😕

I can’t believe how quick this semester is going. Already I have two exams next week! One class has me writing a paper a week. They’re short, though. At least I’m feeling a bit more challenged than usual. 🙂

I have a love/hate relationship with the idea of marriage. I do want to get married in the future, I really do. But lately, I’ve been feeling like I want it to be in the distant future. I dunno, it’s kinda weird. I think it may be the influence of my sister, {Teresa} visiting. I was talking about marriage with her and my neice, {Amber} (I think), and I mentioned that I would like to get married soonly. T jumped right in and said, “why do you want to get married now? You’re too young! You have the rest of your life to be married. Have fun being young now.”