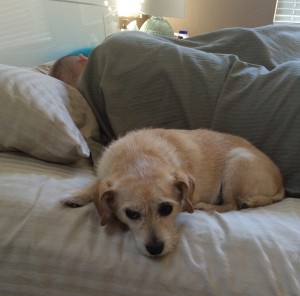 Jetty sure has been cracking me up lately. For those not in the know, Jetty is our 6 year old dog. He’s a terrier mix and he weighs about 10 lbs. He’s a small guy, people always think he’s a puppy when they see him but he hasn’t been a puppy for some time now. In fact, DH and I joke that Jetty is becoming a teenager. He likes to hang out by himself a lot of the time and he’ll frequently leave a room when either of us comes into it! But lately he has been sticking closer to us. I took this picture the other morning when I got out of the shower and found he had made himself comfortable in bed with DH.

Recently, I put a baby gate up in the doorway leading from our kitchen/family room into our dining room/living room. Now that we have dark hardwood floors down, his light fur shedding is so much more prominent… we didn’t think of that when we chose the color. Oops! So I put the gate up so he wouldn’t be able to go into that room and therefore, I wouldn’t have to clean in there as much. The solutions an exhausted pregnant lady comes up with! That room is at the front of our house and he used to like to jump up on the sofa and watch the people go by (and bark at them) so I think he’s a little forlorn now that he can’t go in there. 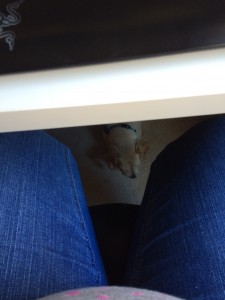 Some people say that animals are more sensitive to their humans when they’re sick and I know there are some animals like that… I just don’t think Jetty is one of them! But I have noticed him sticking closer by me the more pregnant I become. Maybe he is sensitive. Or maybe he’s just feeling attention starved since I haven’t been able to get down on the floor and play with him like I used to! I took this picture as I sat down at the computer this afternoon. He parked himself right below my feet. He hardly ever does that. With all of the work that’s been done on his body lately, DH can’t really get down and play with him either. We take him over to my in-laws house pretty regularly though and he gets to play with their miniature pinscher, they’re about the same size and best buddies.

He sure is a funny guy and we’re happy to have him around!