When we last left Mike’s cancer story, he had just started back up on chemotherapy treatment after taking a break to have surgery needed to correct the infection on his back. Michael continued his chemotherapy treatment (once a week with a break on week 3) for the next 4 months. On June 25, doctors requested scans to check on the progress of the tumors in his spleen and liver. The results were not what we were hoping for.

Basically this chemo was not really making the tumors better. It kept them from growing bigger, and allowed the spleen to return to its normal size (which reduced Mike’s pain and allowed him to eat normally) but it didn’t really make the tumors smaller at all. After all the time, pain and trouble Mike had been through doing chemotherapy, this news was really discouraging. Mike’s doctor discussed his case in conference with her colleagues to decide on the best course of action: different chemotherapy? Radiation? Surgery?

We decided that the best course of action to take moving forward would be a resection surgery to remove the cancerous tumors from Michael’s body. He would need to take the next 3-4 weeks off of chemotherapy to let his body recover and his white blood cell counts to come up before they could do a surgery. He received his last chemotherapy treatment on July 9. The surgery was scheduled for August 13 and Dr. Singh would be performing it. I was not excited at the thought of Mike undergoing a 4th surgery in under 2 years, but the hope is that once all of the lesions are removed from his body, this will complete his third cancer treatment. 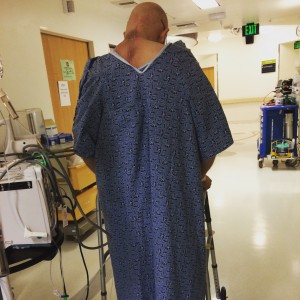 On one of his many walks through the hospital during his stay.

On Aug 13 we arrived at the hospital for surgery. It ended up taking 6 hours and went very well. The doctor was able to remove his spleen laparoscopically, which cuts down on healing time because the incisions are much smaller. When he got to the liver, he found that instead of 4 lesions there were actually 8-9. So he made the decision to resect two entire segments of the liver (6 & 7) to eliminate all of those. Those areas would regenerate in 8-10 days. He also decided to remove the gallbladder, since it was close to the cancerous part of the liver and he wanted to ensure good margins (and we don’t need gallbladders anyway). Mike has one 8-9 in incision on the right side of his abdomen, and some small cuts where drains and scopes were inserted. Dr. Singh was confident that he removed all cancer from Mike’s body but we will wait to see the results from pathology before determining if any further treatment is needed (chemotherapy/radiation). He was put directly into ICU and, thankfully, had no bad reactions to anesthesia or pain medication this time. 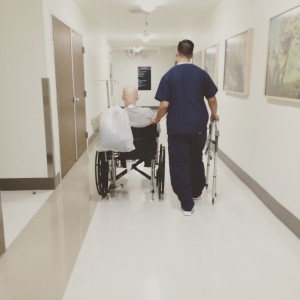 On his way out after being discharged.

Mike had a relatively good hospital stay this time around and was able to be discharged after only 7 days. We are now back home, resting and waiting to hear from doctors if any further treatment is necessary. If not, Mike will continue resting at home and start doing physical therapy to get his strength back. After over 6 months of chemotherapy and 2 surgeries, his body is not exactly in fighting form. He needs help working on building up his stamina so he can walk and stand for more than a couple minutes at a time without losing his breath. He also is still having trouble holding his head up on his own.

As of this writing, I am 33 weeks pregnant and we are staring down the barrel into imminent parenthood. Mike is completely excited and cannot wait to be a father. He is very motivated to get his strength back so he can help me take care of the little one. I have to admit, I wouldn’t mind that either! Thanks for reading!

3 thoughts on “Cancer Update: The Conclusion?”