This is a continuation of Mike’s cancer story. Read the first part here.

On December 18th, 2013 Mike went in for surgery to remove the cancer on his back. Since we were expecting to be in the hospital for Christmas, we celebrated with our friends and family early. The night before surgery we went and had a really nice dinner at The Bazaar in Beverly Hills (I’ll make a separate post about that later).

His surgery took 21 hours, although it went long, it went smoothly and there were no complications. He didn’t even require a blood transfusion during the surgery. By the time I was allowed to see him it was 5AM and I had been awake for over 24 hours. Unfortunately, there was a breakdown in communication between the surgery team and the ICU staff, who had laid him on his back when he was not supposed to be. This caused his flap to become congested (the blood not to flow out) and the plastic surgeons started a leech therapy regimen on him to prevent necrosis of the flap (this is a great article explaining the process).

Seeing Mike come out of surgery was a scary and sobering experience. He had goggles on his eyes to keep them protected during surgery, a breathing tube down his throat and a forced air warming “blanket” (like this) on him to bring up his body temperature. I couldn’t talk with him, touch him, I had no idea how to help him. All I could do was be his advocate in an impersonal hospital system, and that was a full-time job. 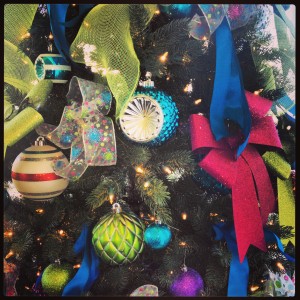 Christmas tree on the ICU floor at the hospital.

Mike was in ICU for the next 20 days. On December 24, 2013 Christmas Eve, they took him off sedation and removed the breathing tube. He was very sore and in a lot of pain, which they treated with Dilaudid. Unfortunately, that pain medication gave him hallucinations and nightmares so we changed to OxyContin.

Unfortunately, Mike’s flap took much longer to heal than the doctors anticipated. They kept him on leech therapy until Jan 9th, 2014. Fortunately he was able to move out of ICU on Jan 7th. On Jan 14th we got the OK to go home after 27 days in the hospital.

I’m truly, truly grateful to City of Hope and all of our doctors and nurses there for saving Michael’s life and helping him to recover. I don’t know that any other hospital or any other team could have done it. But that doesn’t mean it was all smooth sailing. When Michael’s hallucinations were so severe, he told me he’d rather be in pain than continue taking Dilaudid to manage it, I was the one who had to fight his doctors to make his wishes known. When nurses didn’t monitor the leeches properly and they ended up crawling all over his body while he was sedated, I was the one that had to reprimand them and demand new nursing staff. When, after almost 3 weeks in the hospital, the plastic surgery team told my husband that they wouldn’t be changing his treatment regimen over the weekend because they “had the weekend off,” it was me that had to complain to hospital administration about the callous way they treated us.

For the most part hospital staff tries hard to help the patients and make them comfortable, and help them get out of the hospital as soon as possible. For the most part they are very compassionate people and do their best to listen to your concerns. But sometimes you have to be forceful to get your concerns heard and that was very, very hard for me to do. 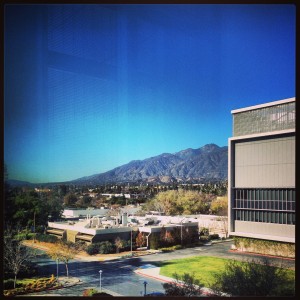 View from the ICU floor on Christmas Eve.

By day 14 in the hospital, I was emotionally and physically drained. We missed spending Christmas with our friends and family. The cafeteria closed early that day, even though it was advertised that it would be open until 1:30PM, so my Christmas dinner ended up being a sandwich from the bistro. We missed celebrating New Year’s Eve. Our 5 year wedding anniversary was just 6 days after we were released from the hospital, but there was no special dinner out or even exchange of presents. Every cent we have is spent on gas traveling to and from the hospital (which is over 70mi from our home), paying hospital and doctor co-pays, paying for motel rooms for me and food (hospital food isn’t so great), etc etc. 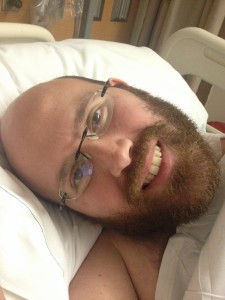 Mike in the hospital

It’s been hard, by far the hardest thing I’ve ever had to do. Not only was I having to take care of my husband, I had to keep our catering company afloat. Luckily January and February is a slow time of year for us and we have a great management team to help pick up the slack. I’ve been so thankful to them for all of their help as well as our family and friends, who have been there for us every step of the way. We couldn’t have come this far without them.

And now we start the slow process of recovery. (To be continued)