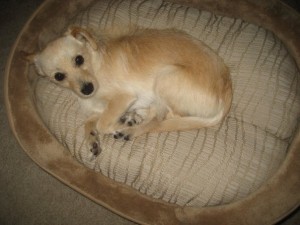 You and Me, and Jetty makes three.

Ever since Mike and I moved in together (November 2008), I’ve been wanting a small dog, since we live in an apartment. At the beginning of this year we actively started looking for a dog to bring into our home. Mike was being scheduled more night shifts and he didn’t want me to get too lonely while he was working.

We both knew that we wanted to adopt a dog from a shelter or rescue, for two reasons. One, because dogs in pet stores tend to be incredibly expensive and two, the dogs sold in pet stores typically come from puppy mills, cruel facilities that breed dogs in inhumane conditions. Not only did we not want to support any organization that mistreats animals for their own profit, but the puppies that come out of those establishments often have multiple health problems due to rampant inbreeding. 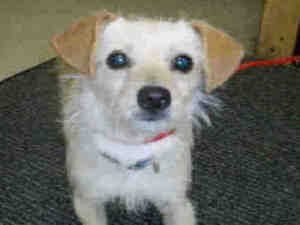 We visited a few rescues and shelters, and finally one rainy Saturday morning we drove out to the Orange County Animal Shelter to look at their dogs. The shelter is not a no-kill shelter, which was one reason we wanted to go there. We wanted to try and give a dog a home before it was slaughtered. Once we got there, I was overwhelmed by all of the faces of the dogs looking back at me. Since it had been raining, they were all wet and pathetic looking, many of them were shivering and bedraggled looking. Jetty was one of them.

Jetty is a one year old “Cairn Terrier.” I put that in quotations because that’s what the shelter’s information said, but if you Google “Cairn Terrier” he doesn’t really look like those dogs. He’s about 7 lbs, has blonde, wiry fur, floppy ears. I think he looks more like a Norfolk Terrier mix, myself.

Mike noticed him because he was one of the only dogs that wasn’t barking. He seemed to be friendly when approached, so we asked if we could meet him. The shelter employee brought him into an enclosure for us to meet him and he was really friendly right off the bat. He was playful and affectionate, everything we wanted in a dog. We found our boy! 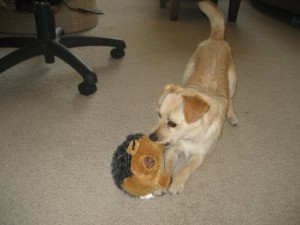 We filled out the paperwork and paid the fee to take him home. The shelter won’t let the animals off the premises until they have their vaccinations, are spayed or neutered, and have a microchip put in, so unfortunately we couldn’t take him home with us that day. We weren’t able to pick him up and bring him home for another ten days, but we were so happy to get him home once we did, and he was happy to be with us!

Jetty was the name that he had at the shelter, Mike and I both thought it was cute enough (and we didn’t want to try and think of a new name!) so we kept it. He wasn’t house broken like we thought, given his age, but he’s a very quick learner, we had him potty trained in less than a week.

I’m so glad that we adopted our little boy. If you or someone you know is considering getting a pet, please adopt! There are so many, many animals in shelters across this country that need homes. 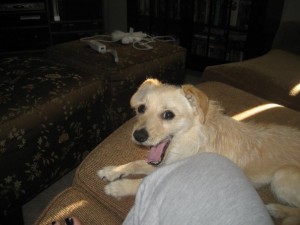 For more information about adopting a pet:

One thought on “…And Jetty makes three.”